SBI is engaged in a series of research program to best accomplish our mission to expand our knowledge on biological systems and applying it to address key challenges in medicine, global energy and climate issues.

AI for Science
Artificial intelligence (AI) is poised to change the way science is done. Our work revolves around using the best of AI technologies to the theme of bettering our understanding of biological systems.

COMPUTATIONAL PLATFORMS for SYSTEMS BIOLOGY (CPSB)
Computational platform such as representation standards, software for modeling, simulation, and analysis, as well as methodologies for modeling and analysis are vital for success of systems biology research. Scroll down to see more..

THEORECTICAL STUDIES
We are involved in fundamental theoretical studies pertaining to the theory of robustness of Cellular Systems, robustness trade-offs and medicine. Scroll down to see more..

SYSTEMS DRUG, COMBINATION THERAPIES AND THERAPY DESIGN
SBI launched its drug and therapy design project with particular focus on cancer. Many diseases are multifactorial involving numbers of genes. Oncogenes are often hubs of the network where intervention may results in serious side effects. Scroll down to see more..

MACHINE LEARNING FOR BIG DATA IN HEALTHCARE AND BIOMEDICINE
We apply the state of the art machine learning tools to understand high dimensional and hetererogenous big data arising in biology and healthcare domains.

TEXT, IMAGE AND VIDEO
UNDERSTANDING For
HEALTHCARE AND BIOMEDICINE
Key to harnessing the power of machines to healthcare and biomedicine domains is to fully understand knowledge that is currently accumulated in text, images and video. We use the state of the art machine learning and deep learning technologies to design and make intelligent systems in this direction.

KNOWLEDGE AGGREGATION,
INFERENCE and
HYPOTHESIS GENERATION
Aggregating diverse information sources to build the hypothesis generation machine which will drive the next wave of biological discoveries.

MATHEMATICAL MODELING
and SIMULATION STUDIES
We perform quantitative and qualitative modeling and simulation studies with the goal of understanding key biological processes and systems.

Artificial intelligence (AI) is poised to change the way science is done. Our work revolves around using the best of AI technologies to the theme of expanding our knowledge on biological systems and its application to healthcare, medicine, global energy and climate issues

Computational platform such as representation standards, software for modeling, simulation, and analysis, as well as methodologies for modeling and analysis are vital for success of systems biology research. However, such resources are still largely missing in systems biology. A serious efforts and investments have to be made to reinforce our arsenal for high impact research in systems biology. SBI, and its precursor projects, have played a major role in creation and continuous development of Systems Biology Markup Language (SBML). With the success of SBML project, SBI is now expanding its activities in CPSB area. Current efforts includes continued development of SBML, a standard graphical notation for molecular interactions (SBGN), CellDesigner™ software enabling graphical editing and simulation of molecular networks that comply with SBGN and SBML, and Payao community-based biological knowledge aggregation system. 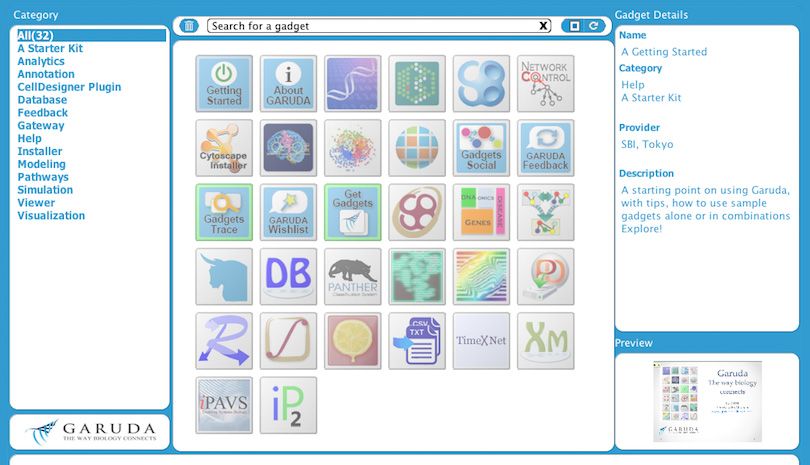 Robustness is phenomena that are ubiquitous observed in various layers from gene regulation to ecosystem. We believe it is one of the fundamental properties of the biological systems where a basic principle of biological systems is embedded. This is because robustness and evolvability may be tightly coupled: mechanisms for enhancing robustness against environment perturbations also enhance evolvability, and more robust individuals tend to be selected through evolution. Thus, evolvable robust system has characteristic architectural features and common underlying mechanisms. At the same time, it inherently entails trade-offs among robustness, fragility, resource demands, and performance. Diseases such as cancer, diabetes mellitus, AIDS, immunological disorders are manifestation of such trade-offs. Therefore, understanding of biological robustness is expected to generate novel interpretation of diseases and therapeutic approaches accordingly. At SBI, we are working on both theoretical and experimental aspects of robustness in biological systems.

SBI launched its drug and therapy design project with particular focus on cancer. Many diseases are multifactorial involving numbers of genes. Oncogenes are often hubs of the network where intervention may results in serious side effects. One possible approach to overcome difficulties in current drug discovery may be to use multiple component multiple target approach where synergetic effects may attain both efficacy and selectivity. SBI is currently working on development of theoretical, experimental, and computational platform to verify this concept and explore possibility of designing such combinatorial drugs. The project involves developmental of computational and theoretical framework, development of a novel yeast-based screening system and its bridge to a screening system using human cells, and computational analysis of screening data from human cancer cell panels.

Cancer is the top killer for Japanese. Its disease phenotype demonstrates high level of robustness against various therapeutic perturbations. One of the ultimate goals for SBI is to discover novel therapeutic approaches that can control and eventually cure cancer. Our fundamental approach is based on the recognition that cancer established itself as robust evolvable system, therefore it also entails inherent trade-offs. Identification of the level of tumor robustness assists clinical decision. Control of robustness may enable us to control tumor progression and even genuine dormancy of tumor. If we can identify extreme fragility, it will lead us to dramatic outcome. Accomplishment of this mission requires rigid and sophisticated theoretical framework and experimentally supported understanding of biological robustness, as well as a set of powerful computational platform and proper approach on how to make the best use of computational power. SBI is committed to promote cancer systems biology by integrating theory and practice. Currently, SBI and its collaborators are investigating possible novel approach for breast cancer.

SBI is involved in international project to create a comprehensive computational model of budding yeast. Currently, SBI is focusing on development of signal transduction and cell cycle model. The project involves both computational and experimental approach to create high precision model.

Global sustainability is an emerging problem. Intergovernmental Panel on Climate Change (IPCC) predicts continuous increase in atmospheric and ocean temperature for coming decades even in the best case of rapid CO2 discharge reduction. Impact of climate change is already observed in many areas of ecology. SBI is involved coral reef study to understand complex molecular dynamics of coral and its symbionts. Coral reefs are tropical rainforest of the sea. They embrace striking biodiversity, CO2 absorption capability, and are a rich source of various biological materials. However, over 70% of coral reefs are in danger due to environmental stresses including global climate change. These important ecological roles are based on a tight mutualism between scleractinian corals and endosymbiotic photosynthetic algae. Understanding robustness and fragility of reef building corals against various stresses is critically important for both scientific and environmental purposes. Scientifically, reef building corals represents complex symbiotic systems and it is ideal to study host symbionts dynamics and their impacts on environmental stresses. Environmentally, understanding coral tolerance and fragility against environmental stresses particularly those related to global climate change may provide us insights for better protection and restoration of coral reef ecosystems. The self-extended symbiosis theory has been proposed to explain relationships between host and symbionts. This theory claims that hosts that can both harbor diverse symbionts should be more tolerant against stresses. It also predicts that corals that are more robust against stresses in general may have slower growth rates, and corals that are tolerant to specific stresses may be fragile to other stresses. These represent trade-offs inherent to biological systems.